John Deans at BISD Board Meeting April 19 2018 from Deans Imaging on Vimeo. 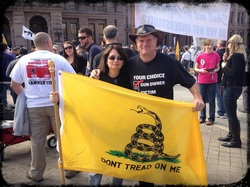 This picture was taken on the grounds of our Texas State Capitol in early 2013 during the big 'gun scare' when legislators we contemplating outlawing of 'assault weapons' aka semi-automatic rifles.  We stood strong against the anti-gunners with Texas standing up and saying "Come and Take It" yet again.

The lady in the picture is my 35 year buddy that will have my back until I die. 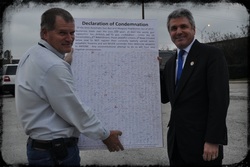 Just after the Sandy Hook massacre in 2012 the anti-gunners tried to make a major run against legal American firearms owners.  We took a stand in Texas in January of 2013 by gathering 1,000 signatures  and pledging the following:

Numerous times over the past 150 years all over the world, gun registration has ALWAYS led to gun confiscation.  Under the US Constitution’s 2nd Amendment, these peaceful citizens of Texas initialed below vow to NOT register their currently lawfully owned semi-automatic firearms and will NEVER surrender their defensive weapons to ANYONE.  Any unconstitutional attempt to do so will have very negative consequences.

This 2'x3' mounted petition was personally handed by me to US Congressman Michael McCaul the Chairman of Homeland Security Oversight Board.  I asked him to take this to Washington DC and present this to any AntiGunner that thinks they can ever take our legally owned firearms away from Texans.  He strong agreed and supported our efforts! 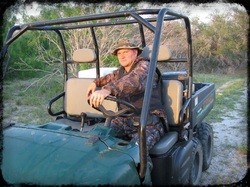 Back in 2006 and 2007, I was an active member of both the Minutemen Civil Defense Corp and the Texas Boarder Volunteers in South Texas.  We conducted civilian monitoring and observation of 100s of illegal aliens trespassing in our county.  We relayed their numbers, Lat/Log positions, and direction of travel to the US Border Patrol.  Our operations were mostly at night with the aid of both night vision and thermal cameras.